Another (very short) cruising season over

After a somewhat soggy sojourn in Banbury we have made it back to base.

It used to be a lovely place to moor but sadly it is now a noisy building site.   However we mananged to find space around the corner after Tom Tolt bridge.   There we stayed hunkered down for three nights of heavy rain.   The one bright spark of the stay was an outing for supper to a local hostelry with Bones, Maffi and Susan.

Sunday saw a lessening of the rain so after coffee we decided to make a run for Cropredy.  We have never seen the locks with so much water 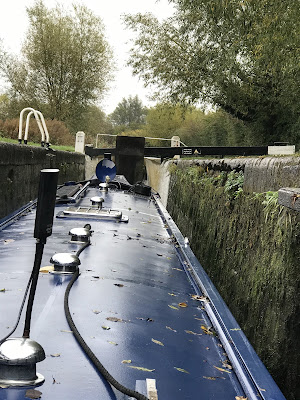 The tow paths were awash and in some places almost non existent.

However the rain held off and we had a easonable run back to Cropredy.

Now all that remains is to pack everything up and abandon poor Petroc until the spring.   We are hoping it wont be such a long time away as this year.

Posted by Gillygrove at 12:33 No comments:

Sunday saw the arrival of Gill and Ronnie complete with home baked cake!!  Slight pause in the diet for the next few days at coffee time......
We lunched in the Jolly Boatman which was OK apart from the mask wearing.   Now you have to wear it until you sit down and if you get up to go to the loo.......however we all seem to be getting used to it.
We stopped to water etc and then had a delightful cruise.  Extremely cold when we set out but sunshine and it did warm up.   The intended plot was to bypass Lower Heyford as the WIFI in the area is less than useless and I had a bridge game booked in the afternoon.   We carried on above Allens Lock in the hope of finding a better signal but to no avail.   I had to reluctantly give in and cancel my game.

Tuesday was  a more leisurely start, somewhat duller but not as cold and it did perk up eventually.  We were definitely in search of better WIFI for this evening as I had bridge booked again!!

Luckily there is water between the cows and us!

During the afternoon Maffi passed by with Susan and stopped for a chat.

The forecast for today was dire so we having a layover day.

Posted by Gillygrove at 12:31 No comments:

3 days in London for me whilst Geoff lingered in solitude just outside Thrupp.    Not completely devoid of company thpugh as Maffi and Susan paused briefly to say helloand his mate Fletch called by to whisk him off to the pub for a pint.  That was apparently not the best experience with the new COVID rules.   They had to sit to be served and when the waitress came over and was asked what beers they had, she didnt know!!!!

That was after battling with underground station that were shut and tubes that never came!!!!   However British Rail (is it still called that??)  came good by being 5 minutes early into Oxford allowing me to just catch the bus I needed and not have to wait 1/2 hour for the next one.

Just tthe one lock to  Thrupp so a gentle little cruise.  Very blustery today.
Friends Gill and Ronnie arriving for lunch tomorrow.
Posted by Gillygrove at 15:21 No comments:

Very quiet here and moored opposite some lovely back gardens.

Another early start today, probably the last if the weather forecast is correct.   It is Ok to have an early start when the temperature is reasonable as today but we are doing this for pleasure and once the cold and rain set in I shall be more reluctant to leave my bed too soon in the mornings!

The first part today was slow as expected as there are a large number of boats moored which reduces our speed,  There are also several lifting bridges for geoff to operate so he had a good walk along that stretch. 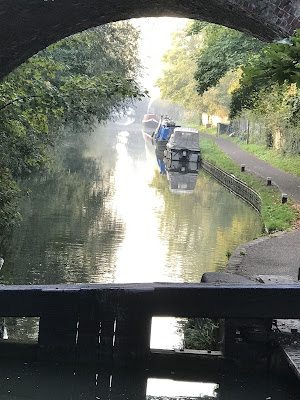 Our goal was Thrupp but just after Kidlington Green lock there was space on the moorings so Geoff decided he would be quite happy there for the next few days whilst I depart for London and granny sitting.   Its a 20 min walk to the road to catch the bus to Oxford and thence the train to London so that will be my exercise for the day!!

Lockdown news is not good but no sign that grannies are to be incarcerated again yet......so have to make the most of it.

Posted by Gillygrove at 20:40 No comments:

Down to the meadow

We eventually left our cosy little mooring above the lock and moved down to the meadow.   On Thursdy we met up with friends Dick and Jackie and took ourselves off to the Nags Head for lunch.  Good company but meal and service left a little bit to be desired.      Ah well...cant have everything.

On Saturday we availed ourselves of a Weatherspoon breakfast.  Not exactly gourmet cooking but fills a space and is dirt cheap!!  Whats more I dont have to cook it or wash it up.

Later in the day Giles and the boys arrived in White Velvet. 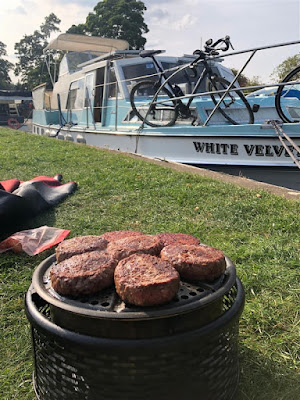 No room to moor near us so we took our contributions to BBQ and ate in their garden!    The hamburgers were 100% improvement on the ones we had in the Nags Head!!

Giles and the boys decided to stay the night, their first night sleeping on board.

Sunday was the last day of our licence so we had an early start back to Oxford.   0720!!!!   Not used to these early mornings anymore.  We watered at the top of the lock and then had a pleasant run back, all the locks on self service.   The lock keepers seem to be on much shorter hours.

Stayed the night in the moorings above Osney Lock and after shopping today bade a fond farewell to the Thmes.   Such a brief visit this year but at least we made it.

Hardly a boat had moved this morning but as I approached ISIS lock a hire boat emerged and turned around to go back up.   Not a great drama as we were not in a rush and luckily the plan was only to go as far as Aristortle Bridge.   It might have been tedious if we were going further as it was a learner driver going at snails pace.    There is slow......and slower.

Posted by Gillygrove at 12:36 No comments:

So nice on the mooring we lingered yet another day but then moved down to the meadows in Abingdon.    Availed ourselves of the sanitary station at the top of the lock.  However despite a good flow of water we left before completley filling the tank as a large number of people were waiting.

Found a congenial spot although we had trouble getting the stern right in.......a bit shallow......do we need rain????

Met old friends Dick and Jackie and took ourselves off to lunch in the Nags Head.  Good company, but service and food that left a little bit to be desired.  Despite having booked a table we still had to queue to get in and efficiency didnt seem to be much in evidence.

Theres worrying talk of further lockdowns on the news so we are wondering what will happen next.

Posted by Gillygrove at 21:00 No comments:

Seduced by a nice mooring 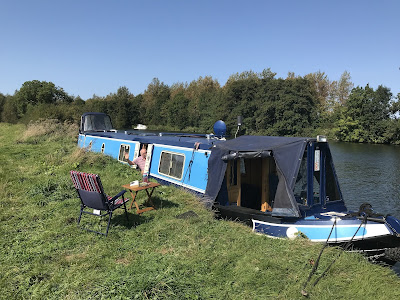 We set off on Sunday morning with Abingdon the goal.    However just short of Abingdon we saw a lovely little spot that was just Petroc size out in the open........

We had seen the lock keeper on Saturday evening who said he would be at Osney Lock just after 9 and yes he could sell us a short stay Thames licence.   This was contrary to what the lady at EA had told me previously on the telephone, who said lock keepers were no longer issuing licences!!

We duly presented ourselves and bought a weeks licence.

We gently ambled our way through Oxford doing some neat zigzagging to avoid lots of rowers.
We briefly thought we might moor above Sandford lock for the night but there was no room.
Just short of Abingdon however we spotted this nice little place......might have been made for us.

We are alongside the pathway so we see walkers.   So pleasant we have decided to stay an extra day.   We seem to have chosen the best week for our mini Thames trip.   In fact today is even too hot to sit in the sun......

However life is not right unless the skipper has something to moan about.   After breakfast I discovered a leak from one of the inlet pipes to the galley sink!   There ensued a lot of huffing and puffing on his part.   At the moment we have a bowl underneath and cloth wrapped around but G walked into Abingdon for his exercise and came back with something that is supposed to cure leaks.......we shall see when it is administered later.    Looks like another job for the winter maintenance list.

Posted by Gillygrove at 14:25 No comments:

Holiday in our house in Cornwall

This years plan is to depart Cropredy about 1st June head north to Braunston, across to the Grand Union, down to Brentford, the Teddington, back up the Thames and the Oxford.
Round trip this year in a leisurely 4 months.